The Night Of The Stars

Night Of The Stars 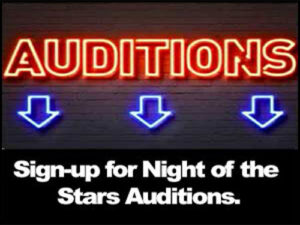 2023 Night of the Stars Auditions

LEAF Night of the Stars Returns in 2023!

After a two-year hiatus due to COVID, the LEAF Night of the Stars returns to the stage on February 10 & 11, 2023!  The shows will be held at the new Tech High School auditorium, beginning at 7:00 p.m. each evening.  Tickets are $16 for adults and $8 for students.  All tickets are general admission, and there will be limited seating available.  Make it a Valentine’s Day treat and enjoy a great display of student talent, while you support the activities program in District 742!  Watch for an announcement regarding how to purchase 2023 Night of the Stars tickets right after January 1, 2023!

Begun in 2002 as part of LEAF’s successful effort to save the Middle School activities program, this will be the 20th Night of the Stars!  The show highlights the many talents of our District 742 students and has developed into one of the highlights of the school year!  It’s a show you don’t want to miss!

As part of LEAF’s efforts to save Junior High activities, the annual “Night of the Stars” talent show was initiated in April, 2002. This fundraising effort was initially held at the St. Cloud Civic Center. “Night of the Stars” promotes the work of LEAF and the impact of endowment-funded grant cycles for District 742 activities. For the first three years, the Civic Center venue for this event showcased athletic clinics and music activities. Alumni pro athletes Jim Eisenreich, Jim Fahnhorst, and Keith Fahnhorst have made appearances and outstanding music alumni have graced the concert stage. In 2004, Christopher Weldon, concert pianist and ‘92 Apollo graduate, provided clinics for Tech and Apollo students weekdays and then performed on the “Night of the Stars” stage. Tech’s own Krista Weis, class of ’82, an accomplished music educator and conductor, returned to rehearse and then conduct a combined Apollo and Tech Orchestra. And ’72 Tech grad and acclaimed motivational speaker, Mark Scharenbroich, was a masterful emcee for 2004’s star attractions.

The Night of the Stars, held annually, continues to be a major fundraising event for LEAF, with proceeds divided between the school activities programs that sell tickets and the LEAF Endowment. Support the LEAF Activities Endowment today!