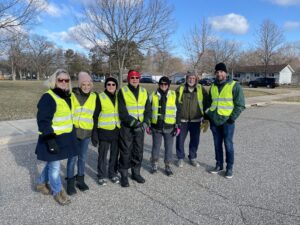 At the Annual Earth Day Half Marathon on Saturday, April 16, members of the LEAF board of directors as well as community members organized through the District 742 Transitional Services Team. Rebecca Groenewold and Jen Loch spent the morning assisting runners by offering water and gatorade at selected stops along the Half Marathon route. Approximately $2,000 was raised to support the “April is Homeless Student Awareness Month” campaign! Thanks to all 40+ volunteers on behalf of homelessness in District 742! The pictures below are of the LEAF volunteers at Water Stop #1 and #6. In the first picture, taken near Selke Field on the southeast side, the volunteers are from left to right: Colleen Hentges, Sara Martini, Peggy Carlson, Chuck Nielsen, Greta Stark-Kraker, Bruce Mohs and Rob Voshell. In the second picture, taken in the Highbanks area near downtown St. Cloud LEAF volunteers shown from left to right are Chuck Nielsen, Charlie Eisenreich, Peg Eisenreich, Colleen Hentges, Peggy Carlson, Shilo Beaver and Dylan Beaver (The cameraman on both pictures was Bruce Hentges)

Thanks to Peggy Carlson for taking the initiative to set up the volunteers and organizing everyone’s assignment, and to Rebecca and Jen for gathering their volunteers. It was a fun (if somewhat cold!) morning! 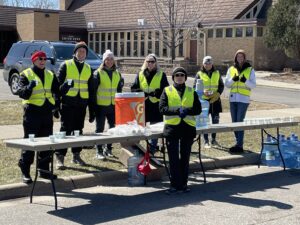